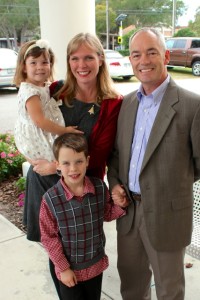 Welcome to my Bio page. As you can see from the photo, I am married to the beautiful Cathleen, and have two children, Landon and Cicely.

I was born in Canterbury, Kent, England in 1965 (yes, the same Canterbury as in “The Archbishop of Canterbury” and “The Canterbury Tales” by Geoffrey Chaucer) went to primary and secondary school in Canterbury, and then entered the world of real estate (or estate agency) at the tender age of 18 after achieving spectacularly unspectacular results in my A-Levels. I was in real estate for 6 years, but along the way had an encounter that changed my life when I understood that there was a God who loved me, cared about me and was interested in my life. You can read more about that story in one of my books, What Martial Arts Taught Me About the Gospel of Jesus Christ.

This sent my life spinning in a new, wonderful direction and at age 24, four years after my conversion, I started study at London Bible College, now known as the London School of Theology. I spent three glorious years studying theology and gained a Bachelor of Arts Hono(u)rs Degree. (This, if you look at the curriculum, was a course of study that compares well to an American M.Div.)

Following Bible College, I joined the missions organization Operation Mobilization, and pioneered a church planting team in Marzahn, East Berlin, Germany. Following that I moved to the US for one year to work in the Atlanta office of OM as a Student Missions Mobilizer, visiting colleges and universities throughout the States to promote OM’s Missions programs. Then I returned to the UK and worked for one year for the British Government as a Fast Stream Civil Servant (basically an accelerated promotion program). It looked as though I was going to head towards some leadership role in the British Civil Service, but it was a strange time to join the government, since this was 1997 and the new Labour government headed by Tony Blair had just come into power, and really didn’t know what to do with my particular department within the Cabinet Office.

During this period, I was invited to become an Associate Pastor of University Praise Church in Fullerton, CA. I had previously met the Lead Pastor on a missions trip to Hungary the summer before, and we had connected to the point where he asked me to come on board and strengthen the teaching ministry of this Gen-X church, that had started as a church within a church, but then became a separate entity. At this church, I met the love of my life, Cathleen, and we were married in 2001. My son Landon was born in 2005 and my daughter Cicely in 2008. I was at University Praise for almost 12 years, eventually becoming the Lead Pastor, but then felt God moving me on.

I agreed to take on a position at South Tampa Fellowship in Tampa, FL  to serve as the Campus Pastor of the Davis Islands campus and as one of the Teaching Pastors. In March of 2014 I was privileged to be called to be the Lead Pastor of Central Christian Church in San Jose, CA working with the current Senior Pastor, Roger Edrington, until he retired at the end of 2014, and then taking over the leadership reins fully after that.

My ministry passions are communicating biblical truth in an appealing and life-practical way, developing leaders and creating strategy to accomplish God’s purposes for this environment. You can read more of my musings on these things in the Blog section of this website. In the last couple of years, I have written three books. You can check those out on the My Books section of this website.

My other passions include spending time with my wife and children, Star Trek: The Next Generation, table-tennis, English Premier League Soccer, reading, and movies.