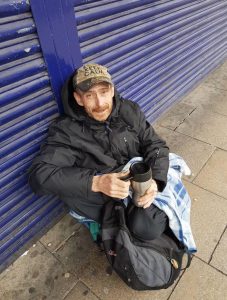 Yesterday, while Landon was at the Zoo, training for his summer Nature Trail program, Cathleen, Cicely and I visited Land’s End trail in San Francisco. After wandering around for a while, exploring the ruins of the Sutro baths, we went back up to the top of the trail and sat in the café, refreshing ourselves with brownies, and warm beverages. It was a somewhat cold day outside, and it was great to be warmed by those hot drinks.

Just as we were close to finishing, a homeless man walked by the window of the café, and the thought occurred to me to buy him a hot chocolate. After we left the café, we looked around and there he was standing by the café window that they use to serve people with pets who couldn’t come inside. Cathleen and I opened our respective wallets to find some money with which to buy the man a drink, but when we turned around, he was holding a pastry and a coffee that had just been handed out to him.

As far as I could see, he had not decided to spend some money on these things. I am pretty much convinced that the people working inside just decided to give them to him, as a simple act of kindness.

And I suspect this was a fairly frequent occurrence.

I was touched by this simple gesture of human kindness. Recently I was out to dinner with a friend, and we were approached by a homeless man. From his appearance and his odor, he was finding it hard to survive on the streets. He had a story to tell, and to his great credit, my friend Phil looked him in the eye, shook his hand at the end of the story, gave him some money and told him to stay safe. The man was overwhelmed with gratitude, and what he said, at least three times, was “Thank you for looking me in the eye.”

The thing which he seemed to value above all else was that my friend had treated him like a human being, with feelings, rather than as a problem to be solved.

In both of these instances, I was treated to a master class in kindness. And isn’t it incredible, that really, all that was involved was treating this other person as though they were human, rather than a pest to be swatted away.

To simply treat others as human.

When Jesus said, “When you do it to the least of these, you do it for me” (Matthew 25) I think he was attempting to save us from this category error, when we are tempted to treat others as sub-human, not deserving of courtesy or kindness.

I’ve not always been treated kindly. I’ve not always treated others kindly. Yet as I read the life of Jesus, so many times he allowed himself to be “interrupted” by those who were seen as an annoyance or an intrusion by others, even the disciples.

This is my prayer today. That I may see you as human. That I may treat you with kindness.