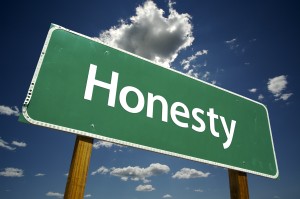 This morning I was listening to a podcast, and the guy, who was not a Christian, made an appeal for people to be candid, as in honest and straightforward. As I was thinking about this, I came to the opinion that we have a conflicted relationship with honesty.

We might say that we want people to be honest with us, but do we really? If what they think affirms what we already think about ourselves, and it is positive, then of course we welcome their honesty. But what if they are honest about our failings? Do we really want and welcome that?

And we believe that we should be honest with others, but if we add kindness to the mix, we may find ourselves being less than honest in order to avoid hurting someone’s feelings. Honesty does not trump all other values in practice. And if we do that, we have to be honest with ourselves about our motives. Am I really holding back out of concern for their feelings, or am I holding back because I have a fear of conflict and I don’t want to rock the boat? What if I’m honest and they don’t like me afterwards? Is that too high a price to pay?

Perhaps the hardest environment for honesty is the “mirror” when we look at ourselves, our own behavior and motives. We want to think well of ourselves. It is psychologically comfortable to do so. We like to think of ourselves as bettr than average. This trait is called “illusory superiority” and it appears everywhere. Consider this extract from a CBS news article:

“In studies, most people overestimate their IQ. For instance, in a classic 1977 study, 94 percent of professors rated themselves above average relative to their peers. In another study, 32 percent of the employees of a software company said they performed better than 19 out of 20 of their colleagues. And Dunning has found that people overestimate how charitable they’ll be in future donation drives, but accurately guess their peers’ donations.

Drivers consistently rate themselves as better than average — even when a test of their hazard perception reveals them to be below par, said Mark Horswill, a psychologist at the University of Queensland in Australia.

So what does the Bible have to say about this?

In Psalm 139:14, we read that we are “fearfully and wonderfully made,” and the Bible consistently teaches that we are the pinnacle of God’s creation. On the other hand, we know that ‘The heart is deceitful above all things and beyond cure. Who can understand it?” (Jeremiah 17:9)

It’s possible to make a mistake of self-assessment in both directions. Some are proud, thinking themselves better than others, and thus blind to their own faults. The consequence is that they see no need of self-improvement, but are only conscious of the mistakes and failings of others. To these, Jesus would say:

Others think of themselves very poorly, believing that they have scraped into God’s kingdom by the skin of their teeth, and that God, at best, tolerates them.

In Romans chapter 12, Paul says this:

So, don’t overestimate yourself but have a realistic, sober assessment of yourself.

Perhaps my favorite example of the balance that we seek is given by Jesus in John chapter 8, where he engages in conversation the woman caught in adultery. After driving away those who would stone her, he says to her: Go now and leave your life of sin.

What an incredible balance. He doesn’t dodge the sin issue. She has done wrong. She knows it. He knows it, and he’s not sugar-coating it. But notice what’s also in here: an implicit belief in her that she is ABLE to leave this life of sin, that she has the potential to live differently. That’s the gospel. It stares sin right in the face, and trumps it with grace.

Let’s do that. Let’s look at others, in full understanding of their faults and failures, and respond with grace. We are all broken people, muddling through, trying our best. And let’s view ourselves that way too.

Don’t give yourself less grace than Jesus would.

For sure, let’s be honest about our sin and aware of our faults and failures, but let’s respond even to ourselves with grace and forgiveness.

17 For God did not send his Son into the world to condemn the world, but to save the world through him.