Have you committed the unpardonable sin? 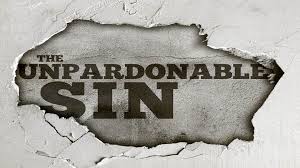 20 Then Jesus entered a house, and again a crowd gathered, so that he and his disciples were not even able to eat. 21 When his family heard about this, they went to take charge of him, for they said, “He is out of his mind.”

22 And the teachers of the law who came down from Jerusalem said, “He is possessed by Beelzebul! By the prince of demons he is driving out demons.”

23 So Jesus called them over to him and began to speak to them in parables: “How can Satan drive out Satan? 24 If a kingdom is divided against itself, that kingdom cannot stand.25 If a house is divided against itself, that house cannot stand. 26 And if Satan opposes himself and is divided, he cannot stand; his end has come. 27 In fact, no one can enter a strong man’s house without first tying him up. Then he can plunder the strong man’s house.28 Truly I tell you, people can be forgiven all their sins and every slander they utter, 29 but whoever blasphemes against the Holy Spirit will never be forgiven; they are guilty of an eternal sin.”

30 He said this because they were saying, “He has an impure spirit.”

In the other gospels, we read that this event follows the healing of the blind and dumb demon-possessed man (Luke 11:14; Matt 12:22). It seems that Jesus’ family is concerned about him because he is neglecting his own health for the cause of healing others. Thinking that this implies insanity, they come to “take charge” of him (the same word used for “arresting him”) and bring him home. Despite the fact that they misunderstand him, we can at least give them credit for caring about his wellbeing.

Jesus is then accused of being in collusion with Satan, and driving out demons by Satan’s power. Jesus speaks to them in parables, and they should draw 2 conclusions from this:

1)    Jesus cannot be in collusion with Satan, for that would be Satan fighting himself, which makes no sense

2)    Jesus is more powerful than Satan, because he is able to destroy his work, and set free those whom Satan had bound.

Verse 29 is the one that has tripped people up, ever since it was spoken and then written. What does it mean to blaspheme against the Holy Spirit? Why is this the unforgiveable sin, when all others are forgivable?

From the Expositor’s Bible Commentary: “Surely what Jesus is speaking here is not of an isolated act of mistaking something good as evil, but rather a settled condition of the soul, the result of a long history of repeated and willful acts of sin. And if the person involved cannot be forgiven it is not so much that God refuses to forgive as it is the sinner refuses to allow him. Ryle’s famous words are great reassurance to any who might be anxious about this sin: ‘There is such a thing as a sin which is never forgiven. But those who are troubled about it are most unlikely to have committed it.’ On the other hand, those who actually do commit the sin are so dominated by evil that it is unlikely that they would be aware of it.” (p.645-6)

In other words, if you are worried about having committed this sin, you almost certainly haven’t.

From this passage though, I draw some words of warning and advice. If I observe a movement happening in some church or country, that may have some strange elements to it (as the Pentecost event did, to the amusement of the onlookers, who thought the disciples were drunk), I should be careful not to judge too quickly and potentially mistake good for evil.

Over the years, genuine revivals have been accompanied by strange signs (people falling over in the Spirit, making strange noises etc.) but still, those revivals have been real. In some churches today, strange phenomena are happening, and it would be easy to dismiss it as wild emotionalism, or even of dark origin. But, the essential question that must be asked is this: what is the fruit? What is the result of this movement? Are people being saved? Are people growing in their love for God and one another? By their fruit shall you know them, Jesus said, and we must be careful to assess the fruit before dismissing the signs.