Can I help you with that log in your eye? 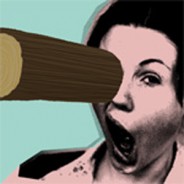 7 The Pharisees and some of the teachers of the law who had come from Jerusalem gathered around Jesus 2 and saw some of his disciples eating food with hands that were defiled, that is, unwashed. 3 (The Pharisees and all the Jews do not eat unless they give their hands a ceremonial washing, holding to the tradition of the elders. 4 When they come from the marketplace they do not eat unless they wash. And they observe many other traditions, such as the washing of cups, pitchers and kettles.)

5 So the Pharisees and teachers of the law asked Jesus, “Why don’t your disciples live according to the tradition of the elders instead of eating their food with defiled hands?”

6 He replied, “Isaiah was right when he prophesied about you hypocrites; as it is written:

“‘These people honor me with their lips,
but their hearts are far from me.
7 They worship me in vain;
their teachings are merely human rules.’

8 You have let go of the commands of God and are holding on to human traditions.”

9 And he continued, “You have a fine way of setting aside the commands of God in order to observe your own traditions! 10 For Moses said, ‘Honor your father and mother,’ and, ‘Anyone who curses their father or mother is to be put to death.’ 11 But you say that if anyone declares that what might have been used to help their father or mother is Corban (that is, devoted to God)— 12 then you no longer let them do anything for their father or mother. 13 Thus you nullify the word of God by your tradition that you have handed down. And you do many things like that.”

14 Again Jesus called the crowd to him and said, “Listen to me, everyone, and understand this.15 Nothing outside a person can defile them by going into them. Rather, it is what comes out of a person that defiles them.” [16]

17 After he had left the crowd and entered the house, his disciples asked him about this parable.18 “Are you so dull?” he asked. “Don’t you see that nothing that enters a person from the outside can defile them? 19 For it doesn’t go into their heart but into their stomach, and then out of the body.” (In saying this, Jesus declared all foods clean.)

20 He went on: “What comes out of a person is what defiles them. 21 For it is from within, out of a person’s heart, that evil thoughts come—sexual immorality, theft, murder, 22 adultery, greed, malice, deceit, lewdness, envy, slander, arrogance and folly. 23 All these evils come from inside and defile a person.”

I find it interesting how the Pharisees are so focused on external behaviors yet ignore the deeper heart questions. I guess it’s easier to do that. It’s easier to focus on performing some external ritual rather than doing the hard work of self-examination and rooting out evil motives in ourselves. Much easier to wash the hands, than cleanse the soul.

For us as Christians, it’s a temptation to focus on the externals too. We may see, for example, someone smoking outside the church building, and think “They are a bad Christian because they are allowing an addiction to master them” and fail to recognize that our own judgmentalism may stink worse to God than cigarette smoke.

Our problem is that we want to assess, to judge, to put people in some sort of category – and observing the externals is the easiest way to do that. But as Jesus points out in v20-23, it is what is in the heart that is most important. And that’s more difficult to assess in others.

But not in ourselves. When we find ourselves making those sort of judgments, perhaps it is a signal to look inwards and ask, “What does it say about me that I wish to categorize this person as a worse Christian than me? Am I proud? Am I judgmental? Am I insecure in God’s acceptance of me, and needing reassurance that I’m better than some others? Am I therefore still locked into a faulty understanding of grace, that it’s somehow based on my performance relative to others?”

In the end, asking those questions, and dealing honestly with what they reveal, is worth much more than any superficial, external judgments we may make on others.